One in six people in the UK have a hearing loss.

A common perception is that hearing loss is the result of ageing. This is not necessarily true – Did you know that 1 in 6 people in the UK have some degree of hearing loss? One third of which are of working age (16-64).

This is the most common form of hearing loss. It is a result of damage to the inner ear affecting the ear’s ability to transmit sounds to the brain. This accounts for 90% of permanent hearing loss.

This is caused by any obstruction that prevents sound waves from reaching the inner ear, for example:

There are a number of choices you can make regarding your hearing loss. However the first and easiest step is to get your hearing tested. A hearing test is quick, simple and painless and in most cases the results are instant.

If you are worried about any aspect of your hearing or would like to book an appointment to get your hearing tested, call us on 0800 195 3544.

The human ear consists of three parts – the outer, middle,
and inner ear. 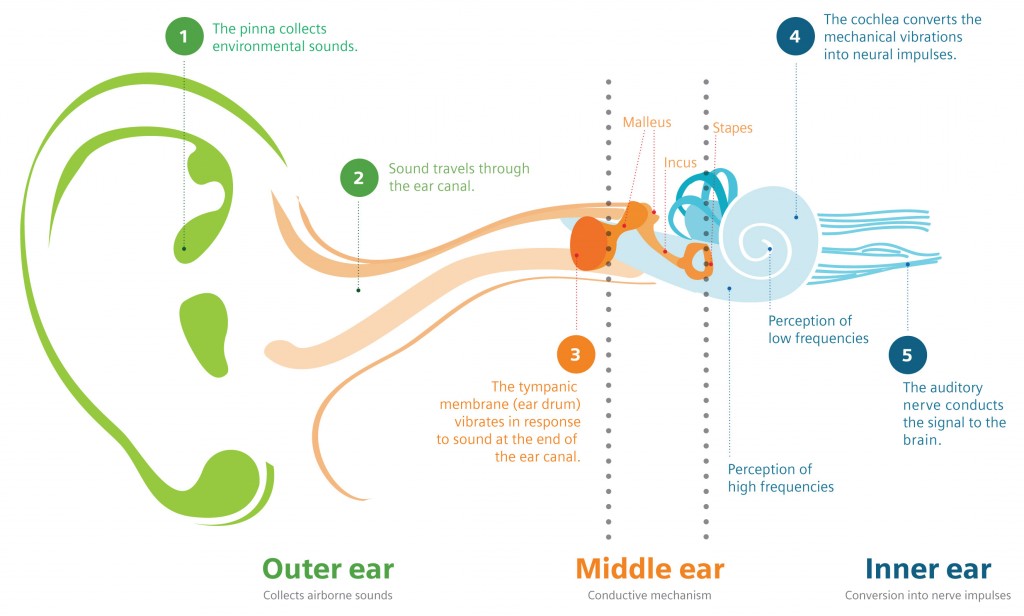 consists of the visible part of the ear, also called the auricle, and the ear canal. What we call ‘noises’ are actually just ‘sound waves’, which are transmitted by the air. Sound waves are collected and guided through the ear canal to the eardrum. The eardrum is a flexible, circular membrane that vibrates when sound waves strike it.

is an air-filled space separated from the outer ear by the eardrum, or the tympanic (pronounced: tim-`pa-nik) membrane. In the middle ear are three tiny bones: malleus, incus, and stapes, often referred to as the hammer, the anvil, and the stirrup. They are collectively known as the ossicles. These form a bridge from the eardrum to the inner ear. The ossicles also vibrate in response to movements of the eardrum and in doing so, amplify and relay the sound to the inner ear via the oval window.

referred to as the cochlea (pronounced: kohk-le-a), is similar in shape to a snail shell. It contains several membranous sections filled with fluids. When the ossicles conduct sound to the oval window, the fluid begins to move, thus stimulating the minute hearing nerve cells, called hair cells, inside the cochlea. These hair cells in turn send electrical impulses via the auditory nerve to the brain where it will be interpreted as sound.